Time is money. Whether buying stocks or opening a business, timeliness is often the difference between winning investments and missed opportunities. This has always been a problem for Indonesia – one of the world’s fastest-growing economies – but the launch of the country’s Online Single Submission (OSS) system in 2018 revolutionized the investment landscape, making it easier to invest than ever before.

Top-heavy bureaucracy, arduous applications requirements, lengthy decision-making processes and red tape were a bane for Indonesian investments for many years. Obtaining simple licenses and permits often took a matter of weeks or months. This became a roadblock for investors that hampered Indonesia’s investment potential. Despite being ranked the fourth most prospective country in which to invest in a United Nations survey for three consecutive years, there has been a long-standing gap between investment commitments and realized investments.

President Joko Widodo – affectionately known as Jokowi – vowed to change that upon his election in 2014 and reaffirmed his commitment after securing his second term in 2019. Already he has made tremendous strides toward opening Indonesia up to foreign investment including the creation of new Special Economic Zones, incentivizing foreign investors with tax holidays and liberalizing the Negative Investment List that locked foreign investors out of certain industries. All of these changes have made a meaningful difference for foreign investors as evidenced by the 28% increase in Foreign Direct Investment (FDI) since Jokowi took office, but OSS is perhaps the most important and powerful change to enhance the investment process.

Launched in July 2018, the OSS is effectively a sharp pair of scissors that cuts through the excessive layers of red tape that made investing difficult in the past. Accessible online, OSS streamlines the process of obtaining business licenses by centralizing and standardizing the process across the central and provincial government as well as municipalities.

The system was designed to do away with lengthy bureaucratic processes and reduce the need to complete piles of paperwork that previously undermined the realization of direct investment. Before OSS, investors had to bounce back and forth between officials at several government institutions when securing permits and licenses. Now they can obtain several permits including business registration numbers and operational permits online within a matter of hours.

The OSS system introduces a new Business Registration Number (NIB) which also functions as a Company Registration Certificate (TDP), Importer Identification Number (API) and customs access rights. The NIB is required to process Business and Commercial licenses, both of which are easy to obtain. Already in the first three months of 2019, more than 158,000 NIBs were issued for an average of 1,756 per day. Legal firms welcome this game-changing reform and believe it will have a far-reaching on the Indonesia’s foreign investment regime.

OSS is already yielding results. FDI increased 5.3% on year in the first quarter of 2019. Thomas Lembong, Chairman of Indonesia’s Investment Coordinating Board, BKPM, underscored that in a press conference when the data was released. He expects the positive FDI growth trend to continue, noting “it’s supported by strong commitment of the government to continue the reform in economy through the better implementation of Online Single Submission, and also intensification of investment guidance related to the central or local government institutions.” 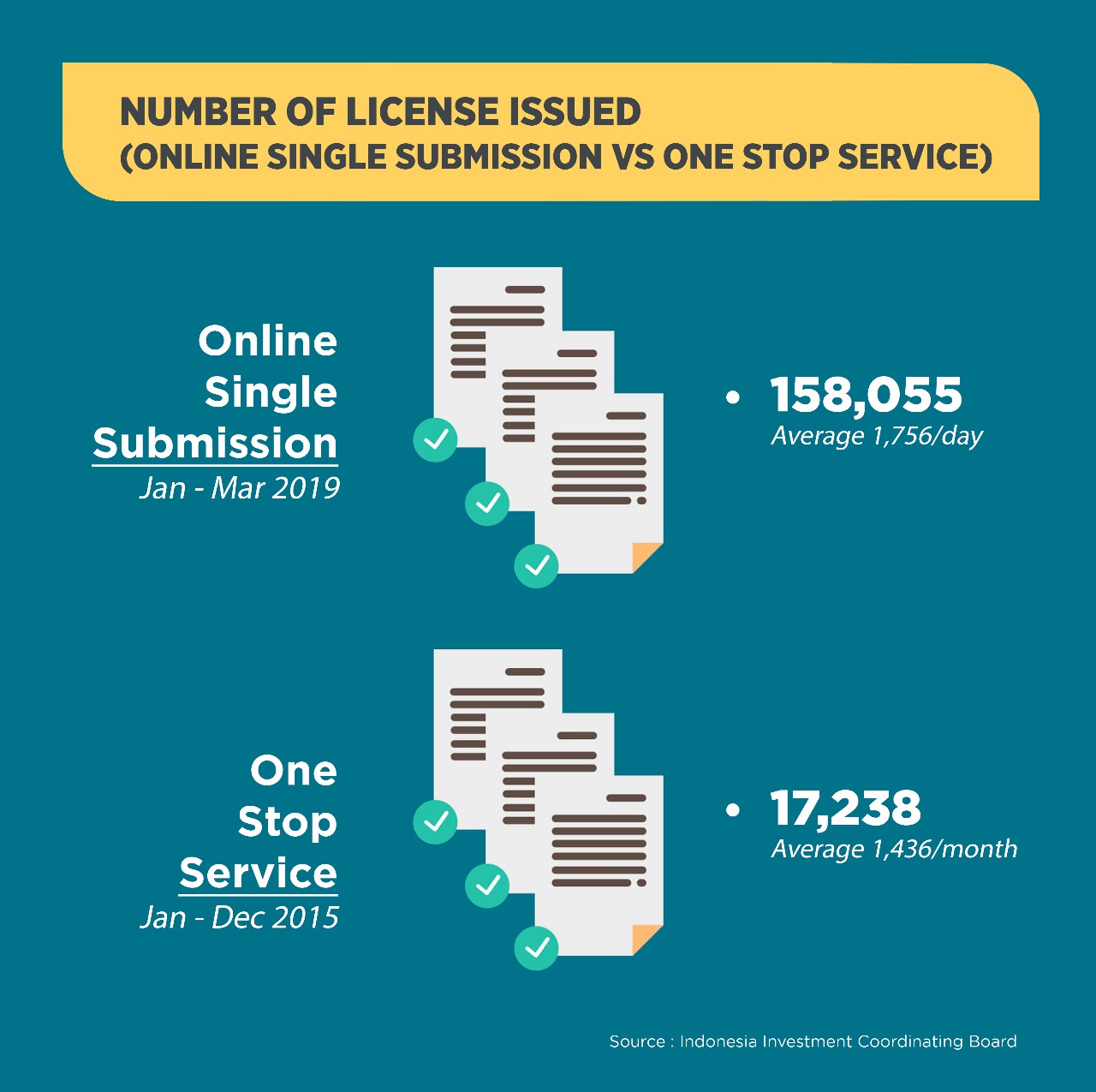 While the rollout of OSS has markedly improved Indonesia’s business climate and made foreign investment easier and more attractive, there’s more work to be done. The government still needs to develop better coordination between ministries and regional administrations as well as make sure procedures are congruent at the central and regional level. To that end, the government plans to roll out an upgraded version of OSS to drive further synchronization and coordination between government ministries and institutions. Further enhancements could follow.

The government introduced very attractive tax holidays in 2018 to lure foreign companies and investors to Indonesia. To streamline and simplify tax incentives, all tax holidays are also processed through the OSS system. More investors started taking advantage of the tax holidays once they were made available through OSS.

The government granted tax holidays to 12 companies with a total investment of $14.45 billion from the time it adjusted its tax holiday scheme at the end of 2018. Seven of those companies are invested in the steel industry, four in the chemical industry and one in electricity infrastructure. In total, their investment was projected to create more than 10,500 jobs.

Together, the OSS system and tax incentives will go a long way in making Indonesia a desirable place to invest. The country has already climbed 41 spots in the World Bank’s Ease of Doing Business rankings since Jokowi took office, securing the 73rd spot in 2019. With Jokowi set on making further reforms and advancing Indonesia toward projections that it will become the world’s 4th largest economy as early as 2030, there’s a lot of investment opportunity at hand and making the most of it will only get easier.