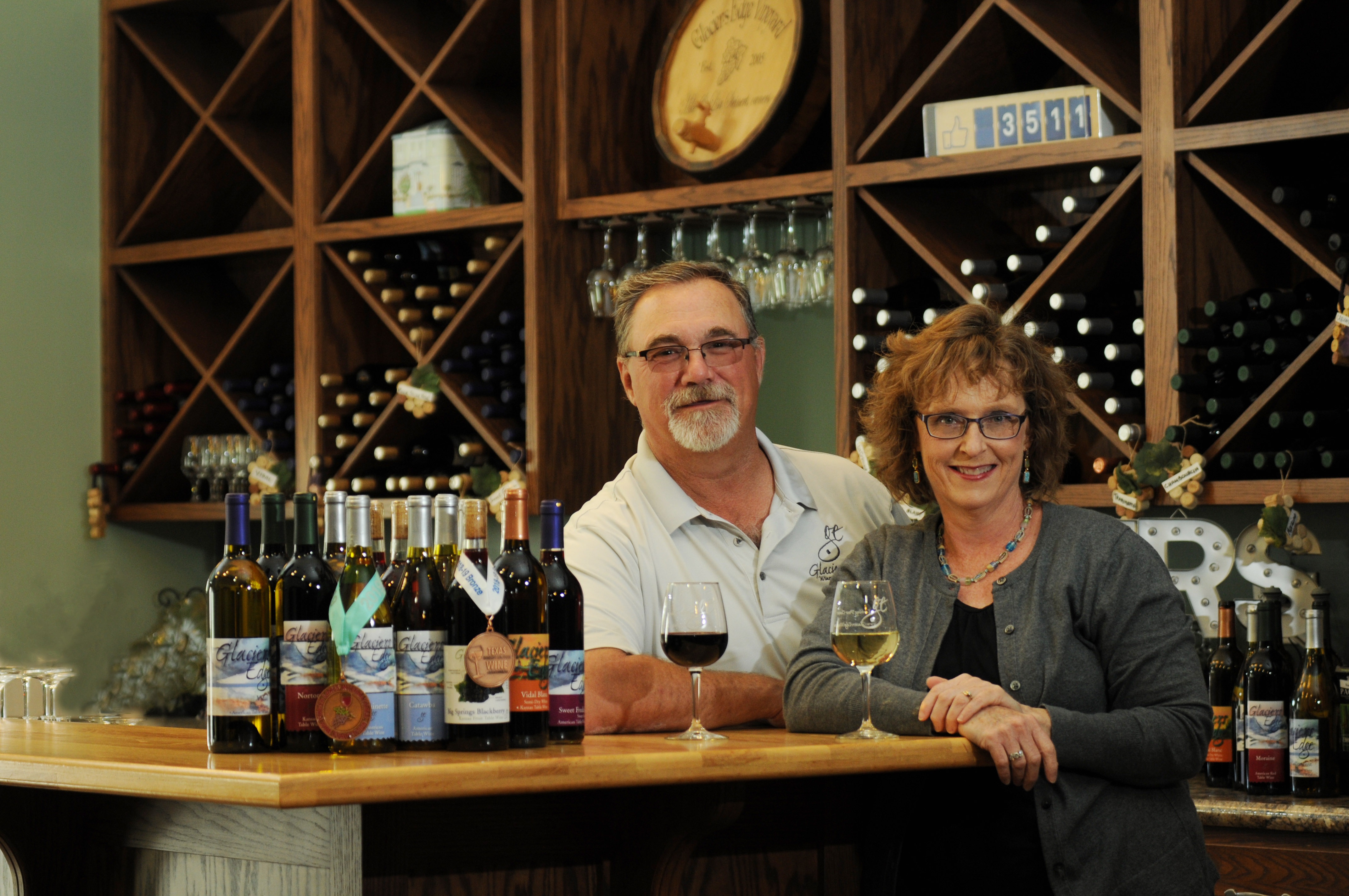 To some, the world is divided into two kinds of people: wine people, and everybody else. But, to anyone who equates the word “connoisseur” with "snob", Mike and Lisa Steinert, owners of Glaciers Edge Winery, have a challenge: try Kansas wine.

“We like to attract individuals who aren’t necessarily into wine,” said Mike Steinert. “Wine can be unapproachable to novices, so we provide a low-pressure atmosphere to showcase what Kansas wines can be and educate people how to appreciate wine in general by explaining actions, such as swirling the wine in the glass, sniffing the wine before sipping, appreciating the color and the proper glass from which to drink. All of these things enhance your perception and enjoyment of the drink.”

Growing conditions in Kansas don’t allow for consistently reliable harvests of such wines as Cabernet, Merlot or Riesling, Steinert said.

“This is why we grow varieties with which consumers may not be familiar, such as Chambourcin, LaCrescent or Frontenac,” he said.

Education about Kansas viticulture introduces a new variety that is often just as good as what the consumer has known previously. That’s part of the angle of Glaciers Edge. Education is key regarding the work, the labor that goes into wine making: planting a vineyard, tending the crop for up to five years before getting any harvest and then maintaining the vineyard through growing seasons that can have drought one season and excessive rains the next.

The Steinerts also enlighten their customers about the process of wine making, detailing the progress of the grapes from the vine to the bottle on the shelf. It is through this understanding that full enjoyment of Kansas wine can be appreciated.

“Folks often ask for the sweetest wines we have,” said Lisa Steinert. “While we don’t offer the typical ‘Moscato’ wines that can be really sweet, we have wines that will satisfy the palate of most wine drinkers. We even have wine slushes for those who don’t typically drink wine.”

“Drinking local supports winemakers, the winery, grape growers and everyone else in the supply chain; it’s a cascading effect of support,” said Mike Steinert. “If we expect people to drink small and drink local we should practice this in our purchases of fruit. Of the fruit we use, 85% of our annual production of 3,500 gallons comes from within Shawnee County and a 50-mile radius of Topeka. We all should support those individuals who are trying to make it on their own.”

Glaciers Edge Winery was supposed to be a retirement gig, something fun for the Steinerts to do when Mike stepped away from his career as a life sciences educator in the Washburn Rural school district. Instead, the winery’s success became the reason he stepped away from the classroom.

The Steinerts’ property is close to the terminal edge of the last glacier that was here some 10,000 years ago. Steinert’s property, where he began his first vineyard adventure, is littered in rose-red quartzite, a remnant of ancient glacier activity.

“We have a half-mile of property where you can’t put a toothpick in the ground without hitting quartzite,” Mike Steinert said. “I ventured into winemaking after my dad tried his hand at it. As many first attempts go, his first batch wasn’t great. But when I told him that, he challenged me: ‘You try it.’”

Stubbornly, Steinert took him up on it and in 2009, they sold their first commercial harvest of grapes to a winery in Louisburg.

“We watched them crush and press the grapes, on a much larger scale than we were used to as hobbyists. It was interesting to see our hard work being transformed into something different, and exciting to see, and it was a thrill for my father,” said Mike Steinert. “The next weekend, he passed away.”

Glaciers Edge now is a venue for bridal showers, weddings and First Fridays events, bringing in local musicians every two weeks. The winery premises boasts an event room with seating for 80, equipped with a state-of-the-art presentation and wireless sound system. It also possesses a patio that seats 45, complete with a fireplace overlooking the young vineyard.

Glaciers Edge also wants civic-minded nonprofits to know that they offer their space without charge as a way to further engage with their local community and support local philanthropic civic organizations.

“We’re glad to be part of the Topeka community and we want people to know they have the option to drink local.”