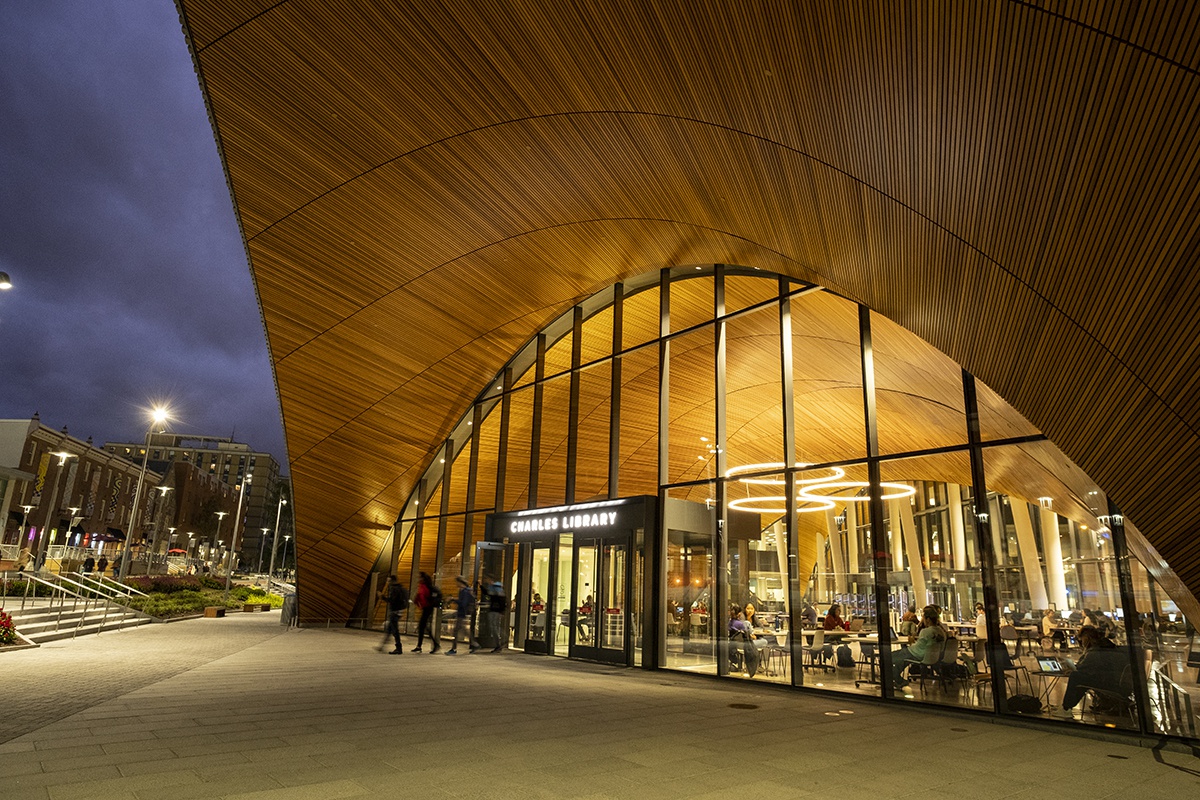 Libraries provide a special experience. They’re donned with elaborate frescoes, grandiose stone pillars, intricate carvings, and, as one would imagine, bookshelves overflowing with extraordinary works that transport you to a magical realm. If you’ve ever visited Trinity College Old Library in Ireland, Stuttgart City Library in Germany, Strahov Monastery Library in Prague, or the Library of El Escorial in Spain, a UNESCO World Heritage site, they were sure to take your breath away.

Like many European libraries, these historic structures began as monasteries in the Middle Ages and served as creative spaces for ideation, imagination and knowledge. As technology has advanced and society has evolved its methods of learning, the perspective that libraries were invented as only a place to host books is becoming antiquated.

This reality was a hurdle Temple University faced in 2009 when its Board of Trustees and administrators began developing the campus’s master plan, which kicked off with the construction of a brand-new library. The goal, according to Joseph Lucia, Temple’s dean of libraries, was to create an innovative space for both Temple students and the surrounding North Philadelphia community to connect.

Named in recognition of Temple Trustee Steve Charles, who donated $10 million towards the project in 2018, Charles Library exemplifies learning in the 21st century while giving a nod to the artistic and educational purpose of libraries’ past.

“If you go back to the very beginning of libraries, they were built as social spaces connected to a temple dedicated to the spirits of imagination and creativity,” said Lucia, who joined Temple’s staff in 2013 to facilitate the project. “It embodies a space that is designed to inspire you and connect you to great ideas and imagination. That unique nature [...] empowered us to think about [Charles Library] as a very distinctive structure that would serve that purpose.”

To bring Temple’s vision to life and meet the needs of contemporary students, Lucia and administrators brought in a renowned international firm, Snøhetta, to help design a cutting-edge facility. The end result, after almost a decade of planning and designing, is a $175 million, four-story learning center. It’s positioned as the focal point of the campus, surrounded by the arts, communication, music, business, science and engineering buildings, to resemble a traditional meeting ground, but also embodies the future of education and research.

Charles Library’s picturesque exterior, which features a striking combination of granite, wood and glass, has received national attention since opening in August 2019. The interior also doesn’t disappoint. It resembles Roman and Byzantine domes with vast arches at the front entrances, dramatic columns in the lobby, an oculus in the center of the ceiling that connects all four floors, and irresistible natural light that flows throughout every corner.

The most groundbreaking feature is the library’s automated storage and book retrieval system, also known as the Book Bot. The 100-foot, three-story high, space-saving robot houses 88 percent of the library’s works—around 1.5 million volumes—that were once stored at its predecessor, Paley Library. As for the remaining 200,000? The books are stored on shelves on the fourth floor for more traditional browsing.

With 220,000 square feet of space, Charles Library fosters modern knowledge and creativity through a visualization and virtual reality studio, a media productions studio, a maker space with 3D printers and laser cutters, 40 meeting and seminar consultation rooms, a 24-hour café, and over 1,000 open seats throughout. For those in search of outdoor inspiration, the library is crowned by a beautiful rooftop patio and garden.

“We are living in a historical moment, and what libraries do has been changing because reading books is no longer the primary way to educate throughout the world,” said Lucia. “Libraries aren’t just where people get books and videos, but places where people come to connect and be a part of a community and [...] experience new technology.”

Keeping true to Temple’s mission of serving the greater community, Charles Library is open to the public who live in Temple’s surrounding North Philadelphia neighborhood, providing access to the computer lab on the first floor. Visitors can also attend any of the library’s lecture readings, discussions and events.

While Charles Library had a long-awaited debut, its arrival has since added a special sentiment for the Temple University family, including all faculty, stuff, students and alumni, as well as North Philadelphia.

“There’s a grand intimacy in the building; it feels warm and comfortable,” said Lucia. “It’s a building that makes a statement about what a library can and should be.”